Strength comes in many forms: physical, emotional, academic, psychological, mental, and spiritual. We have definite ideas of what constitutes strength and power versus what’s perceived as weak and frail. So does the word of God. And, as is often the case, God’s ways are vastly different from our own. He excels in displaying His power in spite of, and maybe even because of, our weakness.

“But He said to me, ‘My grace is sufficient for you, for My power is made perfect in weakness.’ Therefore, I will boast all the more gladly about my weaknesses, so that Christ’s power may rest on me.”  2 Corinthians 12:9

Our society conditions us to have a certain inferred definition of strength and power. Consider these sayings and others you may have grown up hearing:

All these sayings equate strength and power to those values we hold up as admirable (victory, right, growing up, etc.). We even use “strong” as an adjective to describe something in a favorable way: strong heritage, strong military, strong character, strong medicine, strong coffee (definitely a good thing!).

So, we think of strength as an admirable quality, even one to strive toward. But let’s take a look at just a few examples how God used humans to illustrate His strength.

As an infant, Moses was completely powerless. However, he had a mother whose love for him was strong enough to defy a tyrannical ruler and his powerful army. Later, when Moses’ physical body was young and strong, he became a murderer. It wasn’t until he was 80 years old, an age we consider old and decrepit, that God used Moses to lead the release of a million enslaved people! For forty more years he led them, both physically and spiritually, clearly empowered by a strength other than his own.

When Joshua was young and strong, he tried to convince his people that God would keep His promise and deliver the land to the cherished nation of Israel. Forty years later, he led the descendants of those who had rejected his opinion in a spectacular victory. God showed He was in total control by effecting this victory not through the use of swords and might, but by the obedience of the people to simply march around the walls of Jericho as instructed.

Of course, who can think about the strength that comes from the Lord without remembering the beautiful story of a young David defeating the mighty Philistine giant? This same man, however, would later rely on his own power as king to get what he wanted and, in the process, commit the sins of murder and adultery. Despite his short-comings, his repentant heart and devotion to God earned him a place in the lineage the King of kings.

It can be tempting to believe that these and many other illustrations of God’s unswerving and incomparable ability to empower people was only something to read about in the Bible. But when we remember that God is Steadfast, Unchangeable, and Sovereign, we too can rest in the reassurance that His power is readily available to us, even in our weakness.

We’ve seen that strength can be manifested in different forms, but how can we know what our strengths truly are? If we look at Paul’s first letter to the church at Corinth, he introduces the concept of spiritual gifts.

“…But each of you has your own gift from God; one has this gift, another has that.” 1 Corinthians 7:7

He goes on in chapter 12 to expound on the topic of gifts from the Spirit. He immediately follows this discussion with a comparison of the Church and a body, emphasizing the importance of every part, no matter how seemingly insignificant. It’s no coincidence that the idea of giftedness and the illustration of all parts of the body working together are described in such close succession.

What does this mean for us, today’s believers in the Lord Jesus Christ? If we think of ourselves as a part of the Body (Christ’s precious group of believers for which He gave His life), each uniquely gifted to contribute in some way, a clear analogy can be drawn.

If you want to keep your physical body healthy, you don’t eat candy at every meal and do “leg day” at the gym every day. You consume food that’s nutritious and exercise every part of your body regularly. Similarly, God distributes gifts for us to exercise to strengthen the Body, and He provides wholesome “food” for our souls in the form of His word.

As we saw illustrated in the lives of the Biblical greats so familiar to us, we can be strong even when the world perceives us as weak, insignificant, or useless. This idea can be life-altering for someone suffering from a debilitating illness, experiencing the inevitable physical decline of advanced age, or feeling helplessly trapped in a situation (homelessness, unemployment, etc.). If God has allowed us another day on this earth, He has things for us to do!

“And we know that in all things, God works for the good of those who love Him, who have been called according to His purpose.” Romans 8:28

How will we obediently be the part of the Body God has gifted us to be? Have you been called to be a prayer warrior? A teacher? Has God given you the gift of hospitality, enabling you to open your heart and home to be a blessing to others?

Those He calls, He gifts, equipping them for the work He has for them. Don’t squander these precious gifts. Instead, seek to strengthen the Body, your faith, and those around you by using what He entrusted to you.

LeighAnne Clifton and her husband Bill call South Carolina home. Her book, The Little Vessel, is a modern-day parable reminding the reader that God has a purpose for everyone. Her first novel, All Your Heart, is a Christian romance that celebrates God’s Sovereignty and the sanctity of life. It is due out in 2021.

LeighAnne shares her thoughts on Christian living, DIY projects, and the latest book news on her blog:

Some days I wonder what heaven will be like. I try to compare it to the things I know and understand. Will there be animals…

The story of David sparing Saul’s life in 1 Samuel 25 represents the power there is in true forgiveness. Its the forgiveness is freedom mentality.…

2020 was a year many would want to count out of our existence; mostly because it was filled with instability, there was an upheaval of… 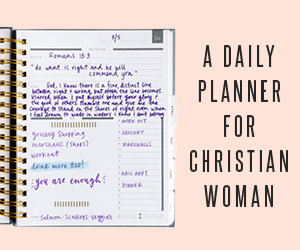